Science History is Made 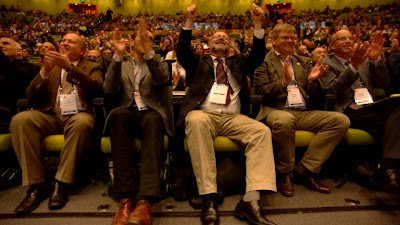 This is the moment history was made.

In an emotional seminar on 4 July between 0900 - 1100 CEST, CERN scientists presented overwhelming evidence for a new particle, consistent with descriptions of the Higgs boson.

Joe Incandela first revealed that CMS have significant evidence of a new boson at 125.3 GeV. Huge applause greeted his news that CMS rate the significance of the results 4.9 sigma. Fabiola Gianotti, head of ATLAS followed, noting with her customary humour and humility, "it's not easy to speak second as all the clever things have been said".
After a lengthy recap on their work from 2011, Gianotti revealed, "you see the excellent consistency everywhere, except one big spike here ....".

The room erupted in spontaneous applause as Gianotti showed that ATLAS have evidence of a new boson at 126.5 GeV with a significance of 5 sigma.

These levels of certainty are worthy of a discovery, prompting CERN director, Rolf Dieter Heuer to comment, "as a layman, I can say, I think we have it".

The particle has been the subject of a 45-year hunt to explain how matter attains its mass.

Both CMS and ATLAS have been quick to caution that more data is needed before they can confirm that their boson discovery is indeed the Higgs mechanism described by theorists. As Rolf Dieter Heuer stressed in the press conference afterward, "we can say we've found a Higgs boson; not the Higgs boson". But it is absolutely evident that whatever has been discovered is what the LHC was designed to detect. The data analysed by both ATLAS and the CMS in the forthcoming months will provide further detail about the precise nature of the new boson.  As Gianotti said, "we are entering the era of Higgs measurements".

Theorist Ignatios Antoniadis commented on the implications of the announcement for theoretical descriptions of the Universe.  "Because of its low mass, such a Higgs boson would allow us to rule out theories known as “technicolor” and some of the theoretical models used in supersymmetry. However, other supersymmetric scenarios could still apply, as well as extra-dimensional theories."