Listening to the Aurora 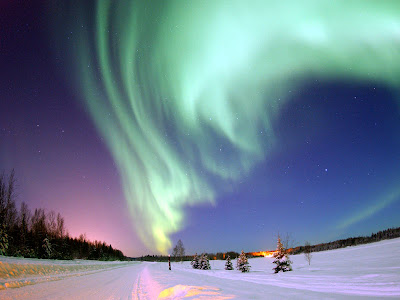 For centuries, folklore has reported that people have been able to hear, as well as see, the Northern Lights, or the aurora borealis. For the first time, researchers in Finland have been able to provide
evidence of what these historical listeners may have been detecting.

The "auroral sounds" are formed about 70 meters above the ground level, according to a team from Aalto University in Finland. They report that "researchers located the sound sources by installing three separate microphones in an observation site where the auroral sounds were recorded. They then compared sounds captured by the microphones and determined the location of the sound source. The aurora borealis was seen at the observation site. The simultaneous measurements of the geomagnetic disturbances, made by the Finnish Meteorological Institute, showed a typical pattern of the northern lights episodes."

Science Daily noted that: "Details about how the auroral sounds are created are still a mystery. The sounds do not occur regularly when the northern lights are seen. The recorded, unamplified sounds can be similar to crackles or muffled bangs which last for only a short period of time. Other people who have heard the auroral sounds have described them as distant noise and sputter. Because of these different descriptions, researchers suspect that there are several mechanisms behind the formation of these auroral sounds. These sounds are so soft that one has to listen very carefully to hear them and to distinguish them from the ambient noise."

Professor Unto Laine from Aalto University commented, "our research proved that, during the occurrence of the northern lights, people can hear natural auroral sounds related to what they see. In the past, researchers thought that the aurora borealis was too far away for people to hear the sounds it made. This is true. However, our research proves that the source of the sounds that are associated with the aurora borealis we see is likely caused by the same energetic particles from the sun that create the northern lights far away in the sky. These particles or the geomagnetic disturbance produced by them seem to create sound much closer to the ground."