Has the LHC found the Higgs? 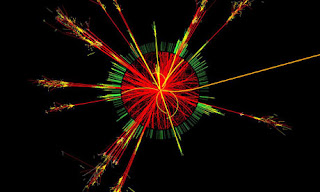 The science blogosphere has been alive with rumours for the past few days suggesting that the large Hadron Collider may have found strong evidence for the Higgs boson. Staff have been notified that a press conference is being held on 13 December, with updates being given from the research groups associated with the two main detectors at the LHC - ATLAS and the CMS.

The rumours are centred on evidence of the Higgs being located at low mass ranges - around 125-126 GeV.

The rumours have become so strong that John Ellis, Clerk Maxwell Professor of Theoretical Physics at King's College London, was quoted today on the BBC, saying that he's expecting to see "the first glimpse of the Higgs next week:

"I think we are going to get the first glimpse. The LHC experiments have already looked high and low for this missing piece. It could be that it weighs several hundred times the proton mass, but that seems very unlikely, then there's a whole intermediate range where we know it cannot be, then there's the low mass range where we actually expect it might be. There seem to be some hints emerging there... and that's what we're going to learn on Tuesday".

Ian Sample provided a useful update of the various positions and murmurings here.