Science has nothing to fear from uncertainty 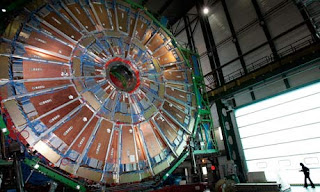 Ahead of today's press conference from CERN, which provides an update of the search for the Higg's boson, LHC physicist, Jon Butterworth, published a thoughtful piece in the Guardian, which reflected on this and the recent neutrino results from OPERA. In relation to the Higgs, he noted;

"Thanks to this machine, we will know quite soon which option – Higgs boson, or not – is realised in nature. If you are curious about the universe we live in, the prospect is pretty tasty either way. The Higgs boson is a long-searched-for prediction of the "standard model" of particle physics. Should it exist, it is responsible for the mass of the fundamental particles we are all made of, such as electrons and quarks. Its discovery would be a stunning vindication that our aesthetics and mathematics are genuinely connected with how the universe really operates. If it doesn't exist, then in a sense it's back to the drawing board: it would mean our understanding of nature has failed at the energies accessible at the LHC. We would have to learn some new tricks."

The quote that really caught my eye though was Butterworth's elaboration of the title of this post:

"It is worth being wrong in public sometimes. We should all know that science is a betting system, not a belief system. Near-certainty arises from a morass of uncertainty, it does not drop from heaven gift-wrapped. "

And now back to holding our breath ahead of the CERN press seminar ....