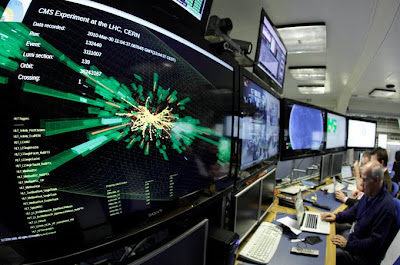 After the excitement from last week's press conference from CERN, which revealed that whilst they are getting closer, scientists still haven't found the Higg's boson, I don't think anyone was expecting a boson discovery from the Large Hadron Collider (LHC) after-all. But we've been given an early Christmas present: the LHC has found it's first particle - Chi_b(nP).
Chi_b(nP) was found by physicists working with the ATLAS detector, who published their findings on arXiv yesterday. It is the first clear evidence for a new particle since the LHC opened in 2009.
Chi_b(nP) is made of a beauty quark and it's antiquark bound together. They are bonded by the so-called strong nuclear force which also causes the atomic nucleus to stick together. Chi_b(nP) is a heavier version of a particle that was first observed around 25 years ago. Like the elusive Higgs, it is a boson, meaning it is a particle that carries force.
"It's interesting for what it tells us about the forces that hold the quark and the anti-quark together - the strong nuclear force. And that's the same force that holds, for instance, the atomic nucleus together with its protons and the neutrons."
Prof Roger Jones from the ATLAS Collaboration, quoted on BBC News.

Email ThisBlogThis!Share to TwitterShare to FacebookShare to Pinterest
Fields: physics