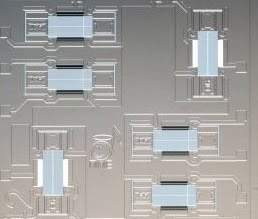 Musician Tony Conrad is quoted as saying, "modern physics had been generated as a branch of music" (http://bit.ly/fBUSe). New research carried out by the University of Twente seems to bear this out, with engineers and physicists creating the world's smallest musical instrument.

The micronium is the first musical instrument with dimensions measured in mere micrometres that produces audible tones. It has strings a fraction of the thickness of a human hair, with microscopic weights to pluck them: A composition has been specially written for the instrument by Arvid Jense, who is studying MediaMusic at the conservatorium in Enschede.

Science Daily notes that earlier musical instruments with these minimal dimensions only produced tones that are inaudible to humans. But thanks to ingenious construction techniques, students from the MESA+ Institute for Nanotechnology of the University of Twente in The Netherlands have succeeded in producing scales that are audible when amplified. To do so, they made use of the possibilities offered by micromechanics: the construction of moving structures with dimensions measured in micrometres. These miniscule devices can be built thanks to the ultra-clean conditions in a 'clean room', and the advanced etching techniques that are possible there.

The micronium played a leading role at the opening of a two-day scientific conference on micromechanics at Atak (http://www.atak.nl) in Enschede in September, where Arvid Jense's composition,'Impromptu No. 1 for Micronium', was premiered.

The tiny musical instrument is made up of springs that are only a tenth of the thickness of a human hair, and vary in length from a half to a whole millimetre. A mass of a few dozen micrograms is hung from these springs. The mass is set in motion by so-called 'comb drives': miniature combs that fit together precisely and shift in relation to each other, so 'plucking' the springs and creating sounds. The mass vibrates with a maximum deflection of just a few micrometres. This minimal movement can be accurately measured, and produces a tone. Each tone has its own mass spring system, and six tones fit on a microchip. By combining a number of chips, a wider range of tones can be achieved.

"The tuning process turned out to be the greatest challenge," says Johan Engelen, who devised and led the project.

Posted by Particle Decelerator at 10:05