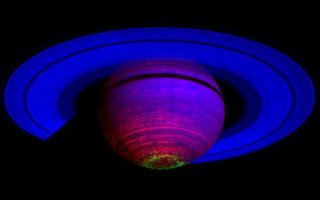 NASA have produced stunning new images and video of Saturn's shimmering aurora. The images are helping scientists understand what drives some of the solar system's most impressive light shows.

Auroras happen when charged particles are funneled along converging magnetic field lines and into the upper atmosphere of a planet's poles. On Earth, aurora are caused mainly by the solar wind. But on Saturn a complex mixture of other geomagnetic phenomena appear to be involved. For instance, auroras can be caused by electromagnetic waves generated when the Saturn's moons move through the plasma that fills it's magnetosphere.

"Saturn's aurora are very complex and we are only just beginning to understand all the factors involved," said Dr Tom Stallard, from the University of Leicester, who presented some preliminary findings from the images at the European Planetary Science Congress in Rome.

Posted by Particle Decelerator at 16:24