Sea Above, Sky Below 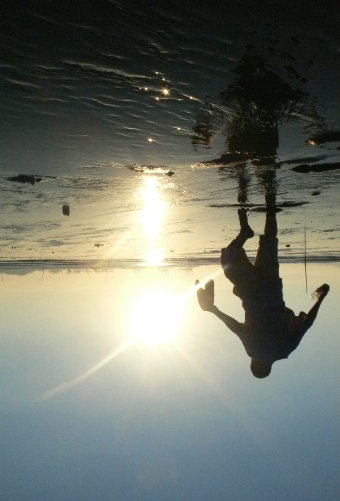 Sea above, sky below.  The phrase is seemingly a contradiction and a mental paradox.  Yet recent research into cosmology, astronomy and oceanography suggests that this riddle is perhaps not as irreconcilable as what it may first appear. Recalling Milton's evocation of the empty heavens as a kind of ocean, the inversion of sea and sky is taking place all around us, in physics and in oceanography.

The most important advances in scientific thought about the origins and structure of the universe now suggest that our world may be just one amongst many, floating in a cosmological sea. The space probe Cassini has revealed that even in the heavens above, oceans may in fact, be commonplace.  Radio astronomers describe the noise storms of Jupiter and its moon Io as sounding like ocean waves breaking up on the beach. And here on the firmament we are increasingly turning to the oceans in order to better understand the skies.


After recently watching the documentary, Seeing Stars, which analyses the new generation of telescopes that enable scientists and engineers to do 'extreme astronomy', I was prompted to revisit some of the unusual techniques which are currently being used to probe the edges of our universe, which I first starting looking into a few years ago.
The documentary, by the way, is well worth watching:


The infant branch of astronomy, known as "neutrino astronomy" is motivated by the possibility of observing phenomena, such as cosmic neutrinos, that are inaccessible to optical telescopes.  Cosmic neutrinos, which are believed to be produced by cosmic rays, are very difficult to detect. By building arrays deep under water, astronomers can make sure that most of the particles they detect are actually produced by cosmic sources. These detectors look down through the Earth to see the universe, using the whole planet as a shield to absorb the riffraff of particles from the atmosphere. 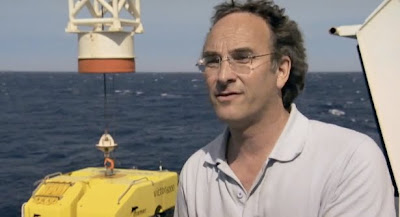 One of the leading voices within oceanic neutrino science is Dr Paschal Coyle (pictured), who is based in Marseille in France.  His 2007 Journal of Physics paper, Neutrinos Out of the (Deep) Blue remains a valuable reference in surveying the various approaches to underwater neutrino observation.

He is a key researcher with the ANTARES observatory, which is situated under the Mediterranean Sea, 42km off the coast of Toulon. His team set out to monitor their below-sea telescope in the brilliantly named research vessel, Pourquoi Pas?.

ANTARES stands for "Astronomy with a Neutrino Telescope and Abyss environmental RESeach project", a rather clunkily assembled acronym, but one that figuratively at least, situates one of our most charismatic stars - Antares - deep under the sea.

The ANTARES detector comprises a total of 900 optical modules distributed over 12 flexible lines, each comprising 25 storeys.  They are anchored at the bottom of the sea at a depth of about 2.5 km, approximately 70 meters apart from each other.

ANTARES is designed to detect neutrinos from space, coming from the direction of the Southern Hemisphere of Earth.  As neutrinos have no mass and no charge, they fly through matter as if it wasn't there, and are therefore fiendishly difficult to detect.  If a cosmic neutrino collided with Earth in the Southern Hemisphere, say for example in Australia, it would fly through the Earth and exit through the Mediterranean sea off southern France on it's way back out to space. ANTARES is constructed with the specific intention of detecting those elusive neutrinos on their ghostly and perpetual journey.  Occasionally, on its journey, a muon neutrino will interact with the water in the Mediterranean. When this happens, it will produce a high energy muon. 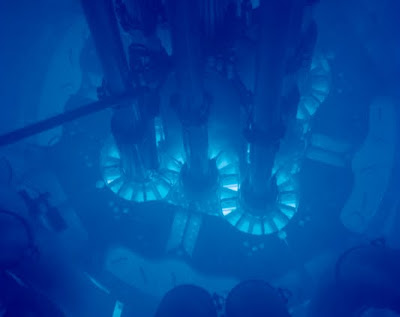 ANTARES works by detecting Cherenkov radiation (pictured) emitted as the muon passes through the water.  So ANTARES is a highly sensitive optical instrument designed to detect the uncanny blue glow of Cherenkov radiation caused by one of the rarest phenomena in existence. 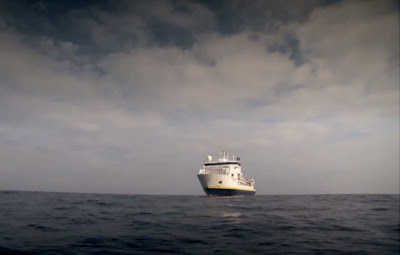 Over the past four years, Paschal Coyle and his team, have made many expeditions to the underwater detector hunting for neutrinos.  Whilst they have detected many neutrinos - consistent with what might be found in the Earth's atmosphere at any one time - they haven't found a single cosmic neutrino.

To put it more formally, as the team did in their May 2012 abstract, "no significant neutrino signal in excess of that expected from atmospheric background has been found".  The team submitted a further paper to the Astrophysical Journal in July, and in it they emphasised, "no statistically significant signal has been found and upper limits on the neutrino flux have been obtained."


Despite this, the search goes on, and ANTARES has more than one function. As well as looking for particles of cosmic origin, and thus being an important part of the astrophysics community, ANTARES is also at the forefront of particle physics research, taking part in the search for dark matter. It complements the dark matter searches performed by experiments such as Fermilab's CDMS, and at CERN's dark matter work at the LHC.

ANTARES' contribution to the field is to attempt to detect a hypothetical phenomena known as "neutralino annihilation", which is thought to take place in the Sun, or the centre of our galaxy.  The theoretical particle, the neutralino, is considered a good candidate for the substance of the universe's cold dark matter. To confirm its existence, neutrino telescopes, such as ANTARES, look for evidence of the annihilation of neutralinos in regions of high dark matter density such as the centres of stars or galaxies.  If ANTARES was able to detect this speculative phenomena, it would be a major breakthrough in our understanding of the universe.

A new generation of telescopes are analysing our skies in ever more novel ways: from vast radio arrays in arid desert mountains, to telescopes strapped to aircraft soaring into the stratosphere, to futuristic Air Fluorescence telescopes looking for high-energy cosmic rays. At the forefront of these techniques are telescopes built underwater, searching our skies from the depths of our oceans.

As it looks through the earth to detect neutrinos from space, ANTARES is peering at the sky below, from the sea above.

Sea Above, Sky Below is the title of a song by Dirty Three, which appears on the 1995 album, Ocean Songs. This post is dedicated to Peter Kirk.

Posted by Particle Decelerator at 15:04