Archaeologists of the Sky

This week I have been spending a lot of time thinking about the artwork of Trevor Paglen, which is currently featuring in an exhibition I co-curated at Lighthouse in Brighton, UK called Geographies of Seeing. Paglen describes his practice as "experimental geography". He is interested in illuminating the "black world" of clandestine military operations carried out in orbit and here on earth.


To do so, one writer has noted, "Paglen looks upwards to the night sky, one of the oldest laboratories of rational thought".

This quote prompted Mark Simpkins to note that, "astronomy is archaeology of the sky", something that resonated strongly with me. It prompted me to check in on the progress of the 21st century's grandest sky archaeology project - the Square Kilometre Array, or SKA.

As we reported in April last year, the SKA will be the world's largest and most sensitive radio telescope.  Rather than being a huge single radio dish, it will be made up of thousands of smaller ones, which are distributed across vast geographical areas.

In May this year it was announced that the SKA would be jointly hosted in Southern Africa and Australia and New Zealand, a decision that prompted some controversy, as the two geographical areas had been in direct competition to host the array.  But controversies aside, this month, the SKA took a major step forward with the launch of Australia's ASKAP - or Australian Square Kilometre Array Pathfinder.


ASKAP is located in remote Western Australia, and is operated by the Murchison Radio Astronomy Observatory. It is made up of 36 identical antennas, each 12 metres in diameter, working together as a single instrument, using the technique of interferometry.  As well as being a significant radio telescope in its own right, ASKAP is an important testbed for the SKA .

A new receiver technology called a "phased array feed" means ASKAP will be able scan the sky much more rapidly than existing radio telescopes, prompting claims it is the fastest radio telescope in the world today.
The sky archaeologists at ASKAP are focusing on some of the major fundamental issues within cosmology and astronomy.  ASKAP is expected to make advances in understanding galaxy formation, dark energy the evolution of the Universe. Some of the initial research will include a census of all galaxies within two billion light years. This may shed light on how our own galaxy, the Milky Way, was formed.

Brian Boyle, the director of ASKAP for CSIRO, Australia's national scientific research organisation, explained why radio astronomy is such a powerful tool in the arsenal of modern science:
"Radio waves tell us unique things about the cosmos, about the gas from which stars were formed, and about exotic objects, pulsars and quasars, that really push the boundaries of our knowledge of the physical laws in the universe". 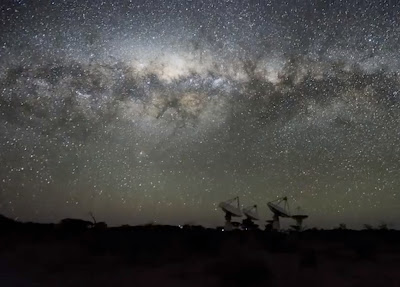 Writer, Rebekah Kebede notes that ASKAP is located in remote Murchison, "an area of 50,000 square kms, or the size of Costa Rica, with barely 120 people."

The location is ideal for radio astronomy because it is "radio quiet" - it lacks man-made radio signals that interfere with antennas designed to detect celestial signals.  The area is the home of the Yamatji Marlpa people, who are the traditional owners of the land on which the observatory is cited.

ASKAP opened on 5 October 2012. Australia will build another 60 antennas for the SKA, which begins construction in 2016.

Huffington Post writer, Alex Cherney has put together a stunning time-lapse video showing ASKAP in motion. The two night-sky images of ASKAP used in this post are from him.