The interface between the outer reaches of theoretical physics and conceptual art is becoming ever closer, it seems.  This year the the work of Austrian physicist, Anton Zeilinger was shown alongside works by major conceptual artist, Lawrence Weiner, and contemporary artists, such as Thomas Bayrle, at Documenta - the contemporary artworld's premier shop window.

And this month, a new exhibition has opened at the Wilmotte art gallery in London, which exhibits the working surfaces of some of the world's leading quantum mechanics labs.

Momentum by Spanish artist Alejandro Guijarro, brings together a collection of large-format photographs of chalkboards taken at the quantum mechanics departments of Oxford and Cambridge universities in the UK, Berkeley and SLAC (the National Accelerator Laboratory) in the States, CERN in Switzerland, and the Instituto de Física Corpuscular in Spain.

The blackboard has long been the iconic visual symbol of the physics lab, an ever-shifting collaborative canvas, exhibiting the abstract mental processes of those working there.  Seemingly impenetrable to the lay-eye, they possess an enigmatic aesthetic quality. 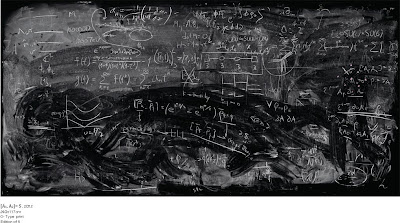 As Megan Garber notes in The Atlantic, "in an age of dry-erase whiteboards and write-on wall paint - an age that has produced surfaces and markers that allow writings to be undone with the ruthless efficiency of a single swipe - blackboards have taken on the wistfulness of the outmoded technology. And the semi-erased chalkboard, in particular - its darkness swirled with the detritus of unknown decisions and revisions - compounds the nostalgia. Its spectral insights mingle in the bright dust of calcium carbonate."

The exhibition displays the images of blackboards life-size, allowing us to scrutinise the equations and begin to appreciate them, not only for their symbolic value, but their line and form.  Guijarro notes, "the images in this series do not purport to be documents holding an objective truth. They function purely as suggestions. They are fragmented pieces of ideas, thoughts or explanations from which arises a level of randomness. They are an attempt to portray the space of a flat surface and of a given frame. They are arbitrary moments in the restless life of an object in constant motion."

The curatorial text of the exhibition also emphasises the art historical lineage of Guijarro's photographs:
"The colourful equations remind us of Basquiat's formulaic language and the white chalk evokes Cy Twombly's later canvases. Each line and smudge has its own history and meaning, produced by a scientist unaware of their artistic merit."

At a time where developments such as the LHC at CERN have brought both experimental and theoretical physics to the wider attention of the public, one is tempted to wonder if these exhibitions are an attempt by the artworld to aestheticise, or even reify, the seemingly abstract field of quantum mechanics.

Momentum is on show at the Wilmotte gallery until the 9th November 2012.

Posted by Particle Decelerator at 12:33