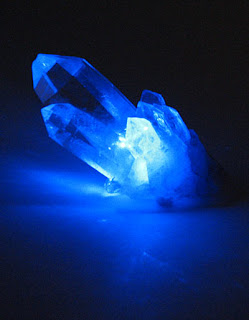 Are crystals possible in time, as well as in space?

Undoubtedly the most outlandish, and beautiful story in this week's science press was the pre-publication of two new papers by MIT's Nobel Prize–winning physicist, Frank Wilczek, which suggests that they are.

Wilczek postulates that if crystals exist in spatial dimensions, then they should exist in the dimension of time too. A time crystal is the temporal equivalent of an everyday crystal, in which atoms occupy positions that repeat periodically in space.

The new research stems from Wilczek's analysis of one of the most important tenets of modern physics - "symmetry breaking". Wilczek, and theoretical particle physicist, Al Shapere, conclude that time symmetry seems just as breakable as spatial symmetry at low energies. Their pithy abstract, published on arXiv earlier this week says:

"We consider the possibility that classical dynamical systems display motion in their lowest energy state, forming a time analogue of crystalline spatial order."

A further abstract postulating the existence of "quantum time crystals" states: "Difficulties around the idea of spontaneous breaking of time translation symmetry in a closed quantum mechanical system are identified, and then overcome in a simple model. The possibility of ordering in imaginary time is also discussed."

Science writers have been quick to interpret the significance of this work, with one helpful article by Alexandra Witze in Science News explaining how Wilczek dreamed up time crystals after teaching a class about classifying crystals in three dimensions. He wondered why that structure couldn’t extend to the fourth dimension - time.

She writes:
"To visualize a time crystal, think of Earth looping back to its same location in space every 365¼ days; the planet repeats itself periodically as it moves through time. But a true time crystal is made not of a planet but of an object in its lowest energy state, like an electron stripped of all possible energy. This object could endlessly loop in time, just as electrons in a superconductor could theoretically flow through space for all eternity."
Wilczek has described how the concept of time crystals reminds him of the excitement he felt when he helped describe a new class of fundamental particles, called anyons, in the 1982.
“I had very much the same kind of feeling as I’m having here,” he says, “that I had a found a new logical possibility for how matter might behave that opened up a new world with many possible directions.”

He went on to note: “I don’t know if this will be of lasting value at all,”

I couldn't help being reminded of Heinrich Hertz's quote when he produced radio waves in the laboratory for the first time: "It's of no use whatsoever...this is just an experiment that proves Maestro Maxwell was right" - Hertz (1887)

It remains to be seen if Wilczek and Shapere's outlandish theory proves to have the profound impact on physics that Hertz's work has had. It will be interesting to see what research follows this publication, and whether or not this idea can be experimentally tested. As physicist Ben Still noted in his talk on Wednesday 15 February, ""Until theorists can come up with ways we can test their theories, they are just dealing with works of fiction."

But when ideas like this emerge, one can't help celebrating the existence of theorists.