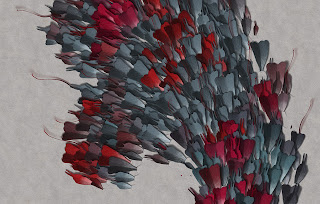 At Lighthouse in Brighton science and art collide in a show which explores the enduring influence of of computer science pioneer, Alan Turing.
Curated by British-based artists, Sue Gollifer, Nick Lambert and Anna Dumitriu, Intuition and Ingenuity is a group exhibition, staged as part of Brighton Science Festival, that illustates the impact of Alan Turing on contemporary art. The exhibition includes computer art pioneers Roman Verostko, William Latham, Ernest Edmonds, and Paul Brown, as well as contemporary media artists, boredomresearch (their work is pictured), Greg Garvey, Patrick Tresset, Anna Dumitriu and Alex May.

The exhibition marks the 100th anniversary of Alan Turing, and it’s part of a year of programmes which celebrate Turing's centenary.

Whilst he may be best known the person who cracked the German Enigma codes during World War II, thus significantly altering the course of the war, Turing also undoubtedly paved the way for the digital world that we live in today. He gave us algorithms and computation, created the foundations of computer science and artificial intelligence, and pioneered new thinking in the field of morphogenesis. So influential is his work, that it's almost impossible to imagine the modern world, now so thoroughly replete with computational technology, without him.It's great to see his legacy honoured by artists and curators.

Intuition and Ingenuity is showing at Lighthouse in Brighton 17 - 26 February, and will then tour to venues in London, Sheffield, Birngham and beyond.
Posted by Particle Decelerator at 19:16