Fundaments of physics safe - thanks to dodgy cable 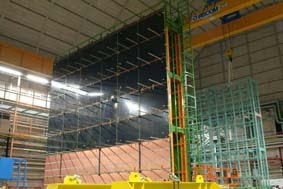 The physics world was alive this week with news that last year's celebrated superluminal neutrino results from the OPERA experiment may have been down to the most domestic of causes - dodgy wiring.

Last September the OPERA research group at the Gran Sasso underground lab in central Italy shocked the physics world by reporting they had recorded neutrinos travelling faster than the speed of light. Neutrinos released from the LHC particle accelerator near Geneva appeared to have travelled the 730km to the Italian lab at speeds exceeding the speed of light. It was a finding that would have turned all of modern physics on it's proverbial head, as it contradicts Einstein's special theory of relativity. The physics community responded with overwhelming skepticism, but as yet had not been able to find the error in their research.
Until this week.

CERN have now released a statement to confirm that a flaw in the OPERA experiment that could explain its puzzling neutrino discovery. It could be down to a faulty optical fibre. The collaboration is now investigating this, and another possible source of error, and it plans to carry out new experimental runs in May.

"The OPERA collaboration has informed its funding agencies and host laboratories that it has identified two possible effects that could have an influence on its neutrino timing measurement. These both require further tests with a short pulsed beam. If confirmed, one would increase the size of the measured effect, the other would diminish it. The first possible effect concerns an oscillator used to provide the time stamps for GPS synchronizations. It could have led to an overestimate of the neutrino's time of flight. The second concerns the optical fibre connector that brings the external GPS signal to the OPERA master clock, which may not have been functioning correctly when the measurements were taken. If this is the case, it could have led to an underestimate of the time of flight of the neutrinos. The potential extent of these two effects is being studied by the OPERA collaboration. New measurements with short pulsed beams are scheduled for May."