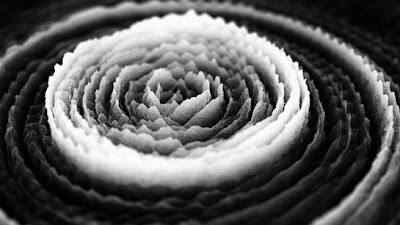 One of the works commissioned for the Invisible Fields: Geographies of Radio Waves exhibition in Barcelona was 20 Hz, an amazing new piece by Brighton-based artists and filmmakers, Semiconductor.

Semiconductor were commissioned to make a piece which showed us the relationship between radio waves and sound. The resulting work - 20 Hz - is an astonishing 5 minute video which uses data collected by the CARISMA radio array. CARISMA (Canadian Array for Realtime Investigations of Magnetic Activity) is is an array of magnetometers which study the Earth’s magnetosphere. 20 Hz is an interpretation of a magnetic storm occurring in the Earth’s upper atmosphere. The CARISMA data – captured at the frequency of 20 Hertz – is interpreted as audio, allowing us to hear the “tweets” and “rumbles” caused by the interaction of solar wind with the Earth’s magnetosphere. The visual element of the film is generated directly by the sound. Tangible and sculptural forms emerge suggestive of scientific visualisations. As different frequencies interact both visually and aurally, complex patterns emerge to create interference phenomena that probe the limits of our perception.

You can watch it at the artists’ website here.

Invisible Fields: Geographies of Radio Waves is a show that explores how our understanding of our world and our cosmos has been transformed by the study of radio waves. It is showing at Arts Santa Mònica in Barcelona, from 14 October 2011 - 4 March 2012.