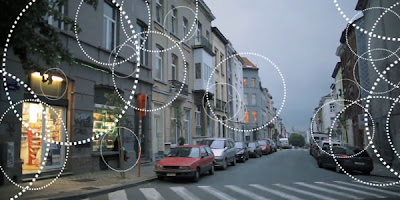 Wireless in the World by Timo Arnall, showing at Invisible Fields.

Last week a new exhibition exploring the radio spectrum - the invisible environment that underpins contemporary technology - opened at Arts Santa Mònica in Barcelona. Mixing science, politics, architecture, design and art, Invisible Fields sets out the spectrum as a physical space, invisible but present, a terrain that can be studied, mapped, surveyed and explored.

It is co-curated by Spanish researcher and curator, José Luis de Vicente and Particle Decelerator's Honor Harger, and is a co-production of Arts Santa Mònica and Lighthouse in the UK (where Honor works).

The exhibition illustrates how artists, designers and activists have worked in tandem with scientists and researchers to illuminate some of most important characteristics of this intangible ecology. It includes well-known artists such as Rafael Lozano-Hemmer, Trevor Paglen, Semiconductor, and Joyce Hinterding, as well as designers including Timo Arnall (of super-design form, BERG) and Anthony DeVincenzi (of the MIT Media Lab), and interventions from astrophysicists, engineers and hackers.

Invisible Fields shows how radio space is an environment made of signals and waves from nature, and from us. Its topography is formed of waves of different scales, from tiny emissions given off by domestic objects to vast emissions made by distant astronomical phenomena. It's made up of signals that are very familiar, such as television and radio, to the esoteric and enigmatic signals. It is an ecology that has public spaces - wireless internet and amateur radio - and secret spaces - coded military transmissions and clandestine signals.

This kind of interdisciplinary exploration of a topic such as the radio spectrum, is rarely undertaken by cultural institutions. With the exception of visionary galleries such as The Science Gallery in Dublin, few arts organisations are open to the idea of exhibitions which blend artistic practice, social-cultural analysis, and science communication. This makes the Laboratory space of Arts Santa Mònica, directed by Josep Perelló, very special, and well worth keeping an eye on.

A catalogue is being produced featuring guest essays by guest essays by Douglas Kahn, Adam Greenfield, Martin Howse. The catalogue, pub;lished by ACTAR, is released in three editions - English, Spanish and Catalan.
There's an online preview of the catalogue here.