Tuning into the sound of the universe with radio 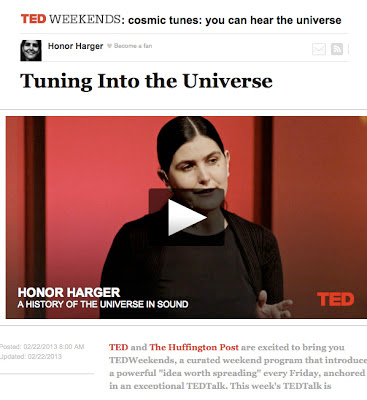 This weekend, Huffington Post have published my piece, Tuning the Universe, which contextualses my TED talk, which they are featuring as part of TED Weekends.

The piece provides some background into the audified radio waves which I played during my talk. Here's the gist of the article:


"We have been surrounded by stunning portrayals of our own solar system and beyond for generations, in books, on film and on television. But in popular culture, we have no sense of what space sounds like.  And indeed, most people associate space with silence.
There are, of course, perfectly valid scientific reasons for assuming so. Space is a vacuum. Sounds cannot propagate in a vacuum.  But through the intervention of radio, it is possible for us to listen to the Sun's fizzling solar flares, the roaring waves and spitting fire of Jupiter's stormy interactions with its moon Io, pulsars' metronomic beats, or the eerie melodic shimmer of a whistler in the magnetosphere."

My talk, and my work in this area, emerges from the science of radio astronomy.

It is important to remember that stars and planets are not directly audible. The recordings I played in my talk are radio waves which have been converted into sound waves using radio receives and amplifiers.  This is a process I refer to as audification. Huffington Post have also published two companion pieces which respond to the talk, the first of which emphasises this point.  Celestial Sound Effects by Seth Shostak notes correctly that, "they're electromagnetic noise, converted by electronic devices ... into signals that - when played through a loudspeaker - become the atmospheric pressure waves we call sound."

The second piece is What Is the Color of the Universe? by Mario Livio, which uses Karl Glazebrook and Ivan Baldry survey of more than 200,000 galaxies (the 2dF Galaxy Redshift Survey) as a basis for examining the colour of the universe.

Thanks to Huffington Post and Janet Lee at TED for publishing the piece.

And here's the talk in full: