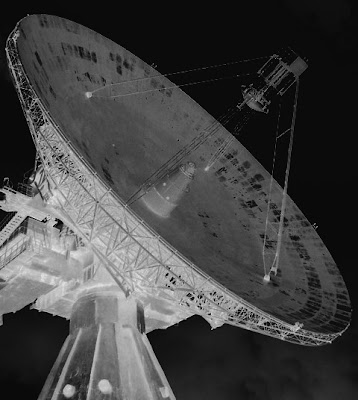 It is very heartening and interesting to read so many fascinating articles, emerging from my Tuning into the Universe piece for Huffington Post this weekend.

Scientists and journalists from Huffington Post community have published a range of pieces on everything from data sonification, to astereoseismology, to the reminiscences of a former astronaut. Together these articles greatly expand the field of general knowledge around the physics of radio astronomy, and our capacity to sensorially experience it.

One of the pieces draws on an interview with radio astronomer, and the co-founder of the SETI Institute, Jill Tarter. Amplifying the central message of  Tuning into the Universe, Tarter notes that:
"when SETI listens to the cosmos, the institute is actually receiving electromagnetic radiation. And then, just the way your radio does, that energy can be used to make audible sound."

The pieces published in response to the article extend, expand and ensonify this notion.  Some of my favourites include:

The Sound of the Deep Sea of Space by radio astronomer, Dr. Tyler Nordgren equates the universe with a vast ocean, echoing Carl Sagan's famous analogy from his series, Cosmos. He poetically maps out the methods of astronomical observation available to modern astronomers, beyond the detection of visible light. He notes: "as a young radio astronomer I learned early on that every time human beings have explored the world with new senses we have discovered new and amazing phenomena".


Voices Carry by Anna Leahy and Douglas Dechow explores the sonic signature of our own planet:
"The sound of the Earth's inherent dynamics -- the movement of atmosphere and oceans -- produces a steady drone as well. Lightning produces crackling, which scientists call sferics."

The article includes a memorable passage about the Voyager Golden Record, which contains 'greetings in 56 languages, natural sounds like thunder and crickets chirping, and music from around the world', encoded in audio and now travelling towards the outer reaches of our solar system on board Voyager.

In An Audible Tour of the Solar System? Sign Me Up!, astronomer and planetary scientist, Jim Bell analyses our celestial neighbourhood, exploring the potential for acoustic sound on each of our nearest planets. The Perfect Quiet of Space by legendary astronaut, Jerry L. Ross, is the extraordinary account of his nine spacewalks, undertaken during his seven missions into space.


He writes eloquently about the silence which astronauts experience, when outside the International Space Station:
"Without the sophisticated listening devices scientists use on earth to hear the whispers of the universe, to an astronaut space is infinite quiet, a place where we bring the only sounds that break the silence."

Sound: The Music of the Universe by Mark Ballora and George Smoot III is an excellent overview of the practice of data sonification, which takes in in the brilliant work of the xSonify team, who are making sonification applications for blind scientists. The article also refers to the emerging science of astereoseismology and exoseismology, which I talked about last Friday in my Sonic Acts talk.

They clearly explain why data sonification methods can be useful:
"Symbolic renderings create other perspectives. Literal renderings are not always compatible with the capabilities of our auditory system. When data points are treated as audio samples and played back at audio rates (typically at 44100 values/second) quick changes are lost to us, as we can't hear fluctuations discretely at the millisecond level. If, instead, we treat the data points symbolically, for example as pitches, we are better able to "magnify" what we are listening to."

In Understanding the Sound of Space, Ayodele Faiyetole notes that sound is under used in science.  He draws on an interview with cosmologist, Yuko Takahashi, who believes there's a great value in presenting scientific results in a totally different dimensions, such as sound:
"Maps of CMB anisotropy can be converted to sound as a telescope sweeps across the sky to give the audience a better appreciation of the fluctuations."

As Ballora and Smoot put it, "if the universe is, at some level, music, then it seems only natural that we should study it with musical tools of thinking."