Spider-goats and the Rise of Synthetic Biology 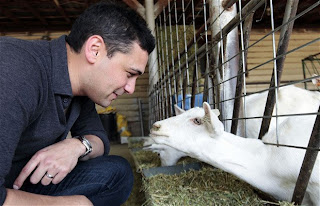 Spider-goats, synthetic neurobiology and bio-hacking - Adam Rutherford's recent synthetic biology documentary for the BBC's flagship science programme, Horizon, is an important compendium of cutting edge ideas. Equal parts fascinating and disturbing, the documentary, provocatively entitled Playing God, was an overview of how synthetic biologists are breaking down nature into spare parts, and rebuilding it however they please.

Rutherford began by introducing viewers to "spider-goats" - goats which have been cross-bred with spiders, so that they excrete spider-silk in their milk.

Spider-silk is among the strongest materials which occurs in nature, but it's practical use to science has been limited by the relatively tiny amounts that scientists can extract from spiders. Spiders are notoriously impossible to farm, due to their cannibalistic nature. So scientists at Utah State University have come up with an ingenious method of producing spider-silk in industrial quantities.

As Rutherford explains in an article for The Observer, Randy Lewis, a professor of genetics at Utah, took the gene that encodes silk from an orb-weaver spider, and placed it among the DNA that prompts milk production in the goats. This genetic circuit was then inserted in an egg and implanted into a mother goat. Now, when the goats lactate, their milk contains spider-silk protein. The practical use for large quantities of spider-silk are numerous, but Lewis is interested in it's medical potential. He notes, "we already know that we can produce spider silk that's good enough to be used in ligament repair. [....] We've done some studies that show that you can put it in the body and you don't get inflammation and get ill."

The documentary further probed the medical implications for this type of work by introducing Ron Weiss's work at MIT. Weiss's team are creating living programmable machines that seek and destroy only the cells that cause disease. Using BioBricks, they have built a "cancer assassin cell". It distinguishes a cancer cell from a healthy cell using a set of five criteria. It then destroys the tumour cell if it satisfied those conditions. As Rutherford notes, "this sniper targeting is the opposite of the blunderbuss approach of chemotherapy, which can destroy both tumour and healthy cells with reckless abandon."

The documentary also probed how relatively simple it has become to experiment with synthetic biology, due to the popularisation of BioBricks and the emergence of biohacking and biology-hobbyists such as BioCurious. After visiting the BioCurious hobby space in the States, Rutherford comments: "there, high-school students were learning about biology by introducing fluorescent proteins from deep-sea jellyfish into bacteria to make them glow in the dark. In 2009, three scientists won Nobel prizes for this work. Already, it is literally child's play."

The documentary analyses industrial applications of synthetic biology, such as the development of synthetic biodiesel. Biotech companies Amyris have modified brewer's yeast so that instead of fermenting sugar to produce alcohol, diesel seeps out of every cell. The biodiesel is already in use.

Rutherford takes a balanced approach to the field, giving watchdog and campaign group, ETC, an opportunity to point of the risks of producing synethetic organisms on an industrial scale.. Their stance on synthetic biology can be found here.

This fascinating documentary and the companion article in The Observer, which documents the main narrative, is an excellent primer to an incredibly fast-moving field.

Posted by Particle Decelerator at 13:59