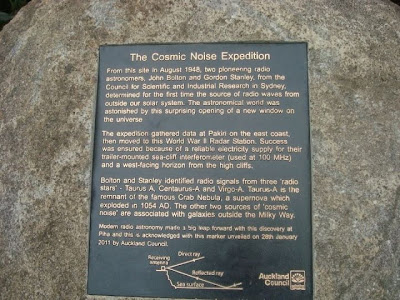 Yesterday a friend of mine, Mike Hodgson, drew my attention to a plaque he discovered in Piha, near Auckland, in my native New Zealand. The plaque - pictured above - is commemorating a major event in radio astronomy history. In August 1948, two radio astronomers, John Bolton and kiwi, Gordon Stanley detected radio waves from outside the solar system for the first time.

This blog post from piha.co.nz documents the scientific discovery in detail.

"It is difficult to comprehend the emotional impact of an observation which took us from the partially explicable solar system and galactic radio emission phenomena, into the realms of phenomena with inexplicably high energy outputs," Stanley wrote in 1994, in a tribute to Bolton, who died in 1993. "Neither of us ever approached such an emotional high again in our work."

Further research showed that the radio signals emanated from the Crab Nebula, the remains of a star that went supernova over a thousand years ago, and a source of fascination for radio and optical astronomers alike. Some of the other radio sources they detected in the same year, during observations in Australia, turned out to be distant galaxies. Radio waves were generated by gas falling into giant black holes.

Following their pioneering discoveries, Bolton went on to become a major figure in Australian radio astronomy, helping found the famous Parkes radio telescope, becoming director of the Australian National Radio Astronomy Observatory and winning the the inaugural Jansky Prize in 1966 (so named after the father of radio astronomy, Karl Jansky).
Stanley became the first Director of the Owens Valley Radio Observatory in the States, run by Caltech.

As a New Zealander with a passionate interest in radio astronomy, I was mightily pleased to discover that 64 years ago, New Zealand was at the very epicentre of radio astronomical research. I'm not sure the same could be said now, but perhaps the radio astronomers of the future can take inspirational from the past.