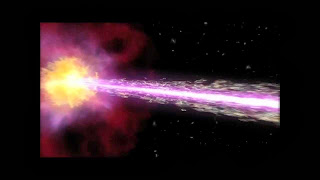 Today might turn out to be a historic day for the field of cosmology.  At 16:00 UTC at the at Harvard-Smithsonian Center for Astrophysics, physicists will be announcing what they are describing as a "major discovery".

Since the news of the announcement broke last week, the cosmology community has been awash with rumours as to what the discovery might be.

Most cosmologists now believe the announcement will concern the detection of gravitational waves in the polarization of the cosmic microwave background radiation, by an experiment called BICEP2, based near the South Pole in Antarctica.

If this is the case, it has wide-ranging implications for our understanding of the early universe.  Detection of these primordial gravitational waves would be the best evidence yet that cosmic inflation occurred, shortly after the Big Bang.  It would strongly support the theory of inflation, posited by Alan Guth, Andrei Linde and others, and developed by a generation of theoretical cosmologists.

Until 1600 UTC today, we won't know for sure, but it is clear that the cosmology community believe the announcement will be highly significant. If evidence for gravitational waves is presented, it would be a pioneering discovery that would change the face of cosmology.

As noted physicist, Sean Carroll, writes:
"Other than finding life on other planets or directly detecting dark matter, I can't think of any other plausible near-term astrophysical discovery more important than this one for improving our understanding of the universe. It would be the biggest thing since dark energy."

Rumours began circulating shortly after a press release was issued last Wednesday. Cosmologist Richard Easther, of the University of Auckland, was amongst the first to pick up on the story, shortly followed by fellow New Zealander, Shaun Hotchkiss, who has been keeping an constantly updated list of posts and background reading material on his Trenches of Discovery blog.  The rumours centre on the supposed detection of "B-modes" at microwave lengths in the cosmic microwave background (CMB).  B-modes have been sought by physicists for years, as they are thought to be the best evidence that a period of inflation occurred immediately after the Big Bang.  If detected, as Phillip Gibbs at viXra notes, "this would be a very big deal indeed because it could be a direct experimental hook into the physics of inflation and even quantum gravity. These are of course the least well understood and most exciting unchartered waters of fundamental physics. Any observation that could provide phenomenology for these areas would be the greatest empirical discovery for the foundations of our universe for decades."

But he urges caution about assessing the implications of the announcement, stressing that, "the new result ... will be scrutinised, not least by rival astronomers from the SPT and Polarbear observatories who only managed to detect lensing B-modes. Why would BICEP2 succeed where they failed? Can they be sure that they correctly subtracted the background? These questions are premature and even immature before we hear the announcement, but it is good to go along prepared for the kind of questions that may need to be asked."


If the rumours are true, the announcement has major significance for the theory of cosmic inflation. As Hotchkiss writes:
"Inflation is a compelling theory, not without some problems, for how the universe evolved in its very earliest stages. If it occurred when the universe had a large enough temperature, it would generate primordial gravitational waves large enough to tickle the CMB enough to make these B-modes visible in the polarisation."

Hiranya Peiris, a cosmologist from University College London emphasises the point by noting:
"The primordial gravitational waves have long been thought to be the smoking gun of inflation. It's as close to a proof of that theory as you are going to get."

Cosmologists believe that only inflation would amplify the primordial gravitational waves into a detectable signal. If BICEP2 has found such a signal, this will be a very big day indeed.