The Beam of Darkness 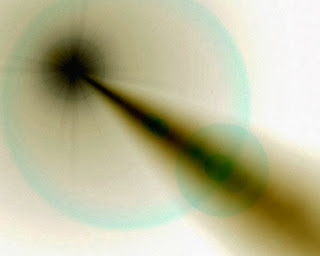 This week, engineers from Singapore released details of a fascinating prototype which takes a radically different approach to the creation of an invisibility cloak.

Whilst still popularly considered the realm of science fiction, many working prototypes for 'invisibility cloaks' have been demonstrated in the past few years, most using metamaterials, and some using tiny antennae.

Using a principle, referred to as "anti-resolution", the Singaporean researchers have taken a completely different approach, and have built a "darkness beam" that bathes objects in the absence of light.

Using special lenses, optical engineer Chao Wan and his colleagues, have effectively created a region of space where the intensity of light is close to zero. As Sebastian Anthony points out, "if there’s no light, nothing can be resolved.  They have created an empty light capsule of invisibility."

The arXiv blog explains further:
"Optical engineers generally build imaging systems with the best possible resolving power. The basic idea is that an imaging system focuses light into a pattern known as a point spreading function. This consists of a central region of high intensity surrounded by a concentric lobe of lower intensity light. The trick to improving resolution is narrowing and intensifying this central region while suppressing the outer lobe. Now [the Singaporean] optical engineers have turned this approach on its head by suppressing the central region so that the field intensity here is zero while intensifying the lobe. The result is a three-dimensional beam of darkness that hides any object inside it."

The researchers describe their technique in detail in a paper on arXiv:

"We theoretically and experimentally demonstrate the focusing of macroscopic 3D darkness surrounded by all light in free space. The object staying in the darkness is similar to staying in an empty light capsule because light just bypasses it by resorting to destructive interference."

In their full paper, the team conclude that the applications for such technology are manifold. And somewhat chilling:

"This new  scheme of maneuvering light creates a plethora of possibilities for optical imaging systems, superb surveillance by seeing things behind for the military use, or cloaking the object surrounded by high field intensity."