Neutrinos back in the spotlight 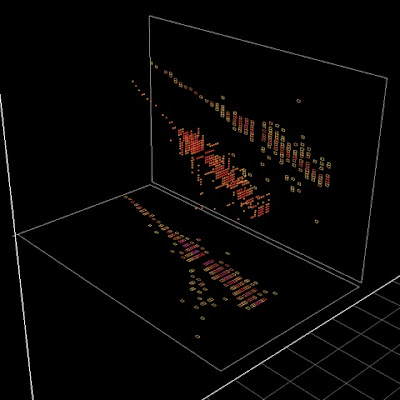 It's been a big couple of weeks for neutrinos. First, the OPERA experiment in Italy revealed that they had detected the transformation of a muon neutrino to a tau neutrino for only the third time in their history. Soon after, Fermilab's NOvA neutrino detector in the States published their first three-dimensional images of the elusive particles (pictured above).  All this followed hard on the heels of one of the most discussed and celebrated science results of the year so far - the new Planck measurement of the cosmic microwave background - which has interesting implications for neutrino physics.

Neutrinos are among the more mysterious and slippery inhabitants of the fundamental particle zoo. They can be created by certain types of radioactive decay, or nuclear reactions like those that take place in stars, or when cosmic rays hit atoms. They have barely any mass and therefore rarely interact with other types of matter.  This makes them fiendishly difficult to observe.  But they are a fascinating area of study for physicists.  Many of the neutrinos around today are thought to have originated in the Big Bang, so understanding their properties will give us important new insights into what the universe was like 13.7 billion years ago, and how it operates on a fundamental level now.

Neutrinos come in three different types, called "flavours": electron, muon and tau.  Forty years ago physicists posited that these particles may occasionally be able to change from flavour to flavour - for instance starting out as a muon neutrino and ending up as a tau neutrino. This transformation could explain one of the great puzzles of neutrino physics.  Theoretical models imply there should be far more neutrinos raining down on the Earth from nuclear reactions in the Sun, than there actually are.  So the mystery of the 'missing neutrinos' has been bothering physicists for over a generation. If it could be proven that the missing particles are actually neutrinos which have changed flavour as they move through space, then this mystery could be solved.

The OPERA experiment in Gran Sasso, Italy was set up specifically for this purpose. It is designed to detect and analyse exactly these kinds of transformations.  But spotting them is no easy matter. On 26 March 2013, OPERA announced that it had observed this exceptionally rare act of 'shape-shifting' for just the third time.  A muon-type neutrino produced at CERN in Geneva arrived at the Gran Sasso laboratory as a tau neutrino. This has only been observed only twice before, once in 2010 and again last year.

OPERA works by studying beams of neutrinos produced at CERN in Switzerland, which travel 732km to the underground laboratory at the Gran Sasso facility, where they can be studied by physicists working on the OPERA detector.   As Kathryn Jepsen, writing in Symmetry, puts it, "the OPERA experiment is a fast-moving, long-distance game of catch, with CERN laboratory at the border of France and Switzerland pitching a concentrated beam of neutrinos toward the 1250-ton OPERA detector. The neutrino is a difficult ball to snag; it interacts so rarely with matter that it can zip unflinchingly through an entire planet."

The neutrinos which leave CERN are muon neutrinos. OPERA is configured to detect tau neutrinos. If it spots one, it can deduce that a 'change of flavour' has occurred en-route.  Detecting such a flavour oscillation, as the team did this March, is significant.  Not only is it, "an important confirmation of the two previous observations", as the the head of OPERA's international research team, Giovanni De Lellis, has said; it also provides more evidence that flavour oscillation may indeed be the reason why the flux of neutrinos from the Sun and Earth's atmosphere is so much smaller than what theorists predict it should be.

Over on the other side of the Atlantic, Fermilab are in the process of establishing the NOvA experiment as the most powerful neutrino detector in the States. They recently took a significant step towards this goal, by releasing their first three-dimensional images of particles analysed in the under-construction detector.

NOvA is a collaboration of 180 scientists, technicians and students from 20 universities and laboratories in the U.S and another 14 institutions around the world.  Later this year, the NOvA detector at Ash River, near the Canadian border will start receiving beams of neutrinos sent from Fermilab, the US equivalent of CERN, which is based near Chicago. The beams of neutrinos will travel 500km from Fermilab to NOvA.  As they say, "when a neutrino interacts with the detector, the particles it produces leave trails of light in their wake. The detector records these streams of light, enabling physicists to identify the original neutrino and measure the amount of energy it had."

Using the first completed section of the NOvA detector, physicists have begun collecting data from cosmic rays - the particles produced by a constant stream of atomic nuclei falling on the Earth's atmosphere from space. The 3D particle images they have produced as a result of this work are helping the physicists fine-tune the instrument. When cosmic rays pass through the NOvA detector, they leave straight tracks and well-understood energy signatures. As Mat Muether, a Fermilab researcher, notes, "they are great for calibration. Everybody loves cosmic rays for this reason. They are simple and abundant and a perfect tool for tuning up a new detector."

Fermilab state, "the detector at its current size catches more than 1000 cosmic rays per second. Naturally occurring neutrinos from cosmic rays, supernovae and the sun stream through the detector at the same time. But the flood of more visible cosmic-ray data makes it difficult to pick them out. Once the upgraded Fermilab neutrino beam starts, the NOvA detector will take data every 1.3 seconds to synchronize with the Fermilab accelerator. Inside this short time window, the burst of neutrinos from Fermilab will be much easier to spot."

The most headline-stealing physics result of the year so far has given us breathtaking new insights into the early universe and our world at it's most basic level. On the 21 March 2013, scientists working with the Planck Space Telescope unveiled the most detailed map ever created of the cosmic microwave background (CMB) - the leftover radiation from the Big Bang.  Whilst the Planck measurement of the CMB hasn't given us that many clues as to what the fundamental properties of neutrinos are, it may have helped us learn what they are not. In recent times, physicists have begun to speculate that there may be a fourth type of neutrino flavour - the sterile neutrino, so called because it is not effected by the weak nuclear force, and therefore interacts even less with other particles than it's shy and retiring, tau, muon and electron neutrino cousins.  But as John Matson writing in Scientific American has noted, Planck's findings suggest that physicists hoping for experimental proof of the sterile neutrino are going to have to look harder or rethink altogether.

All and all, these are fascinating times for neutrino physics, and we shouldn't be surprised if these ghostly little particles take their share of the limelight in the coming year.