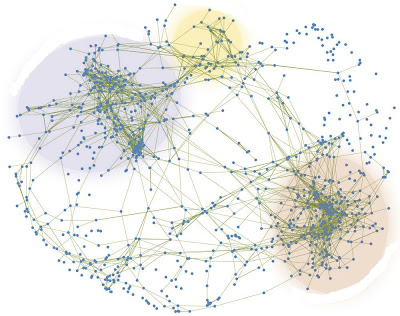 One of the more intriguing papers we've happened upon early this year is some research from the University of Fribourg which suggests that particle physics can improve the technology behind recommendation systems.

Recommendation systems are software which websites such as Amazon and Facebook use to tailor information for users.  When Amazon, somewhat eerily, suggests that you check out a book by a writer you've been just been thinking about, that's a recommendation system, or "engine", in action. Recommendation engines are at the heart of online business, as the good ones are known to generate profits.  Improving them is a key goal for retailers and software companies alike.

But what on earth does particle physics have to do with software like that?  Well, a group of researchers at the at the University of Fribourg in Switzerland believe that the physics which governs the behaviour of photons and electrons may also be used to optimise recommendation engines.

Stanislao Gualdi, Matus Medo, and Yi-Cheng Zhang this month published an abstract on arXiv entitled, "Crowd Avoidance and Diversity in Socio-Economic Systems and Recommendation".  The paper's key insight is that the problem with recommendation engines is that they can lead to 'overcrowding' around a specific product or service, which can be detrimental to the experience users have with it.  Surges in demand can be sometimes advantageous, but if the value of a resource diminishes as more people use it, then this creates a problem.  A good example would be a service like Netflix recommending the same movie to too many of its users, thereby creating long waiting times for everyone. Another good example, would be a travel website recommending a beach or a picnic spot because it is quiet. As Technology Review noted "this can end up destroying the peace that gives it value. Similarly, restaurant recommendations can lead to overcrowding or difficulty getting a table which again makes the dining experience unpleasant."

These examples show how over-stimulated demand can reduce the value of a resource. Gualdi, Medo and Zhang set about to tackle this issue.  They applied the logic employed in particle physics, where particles tend to occupy the most energetically favourable states. Technology Review explain:
"If the particles are bosons, such as photons, there is no limit to the number that can occupy a given state. But if they are fermions, like electrons, their physical properties dictate that no two can occupy the same state. Clearly the resulting distribution of these different types of particles is entirely different.The analogy here is with goods that any number of people can share or that only one person can have."

The latter case - products or experiences that are best experienced by small groups, or even individuals - provides a dilemma for recommendation engines. In order for these things to retain their value, they need to remain available only to limited umbers of people. Gualdi, Medo and Zhang insist that the principle of 'crowd avoidance' needs to be employed to avoid oversubscription, crowding and disappointment.

It's a fascinating and quirky approach, and if they are right, and their technique is employed by the software developers who design and build our online world, it might just transform what is recommended to us, and when, and how we experience it.

Posted by Particle Decelerator at 17:36