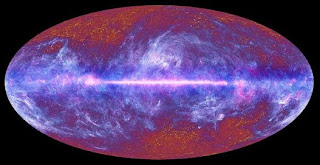 Two new papers published in the Physical Review Letters appear to provide new evidence for the existence of dark energy – the mysterious substance that appears to be accelerating the expansion of the universe. A team of astronomers at the University of California, Berkeley have found what they refer to as "direct evidence" for dark energy within the cosmic microwave background (CMB).

"The CMB is the faint afterglow of the universe's birth in the Big Bang. Around 400,000 years after its creation, the universe had cooled sufficiently to allow electrons to bind to atomic nuclei. This "recombination" set the CMB radiation free from the dense fog of plasma that was containing it. Space telescopes such as WMAP and Planck have charted the CMB and found its presence in all parts of the sky, with a temperature of 2.7K. However, measurements also show tiny fluctuations in this temperature on the scale of one part in a million. These fluctuations follow a Gaussian distribution."

Sudeep Das and his colleagues at the University of California, Berkeley, used the Atacama Cosmology Telescope in Chile to uncover fluctuations in the CMB that deviate from this Gaussian distribution. "On average, a CMB photon will have encountered around 50 large-scale structures before it reaches our telescope," Das told Physics World.

"The gravitational influence of these structures, which are dominated by massive clumps of dark matter, will each deflect the path of the photon," he adds. This process, called "lensing", eventually adds up to a total deflection of around 3 arc minutes – one-20th of a degree.

"In the second paper Das, along with Blake Sherwin of Princeton University and Joanna Dunkley of Oxford University, looks at how lensing could reveal dark energy. Dark energy acts to counter the emergence of structures within the universe. A universe with no dark energy would have a lot of structure. As a result, the CMB photons would undergo greater lensing and the fluctuations would deviate more from the original Gaussian distribution. However, the opposite was found to be true. "We see too little lensing to account for a universe with no dark energy," Sherwin told physicsworld.com. "In fact, the amount of lensing we see is consistent with the amount of dark energy we would expect to see from other measurements."

This is the first time dark energy has been inferred from measurements of the CMB alone.

The fact that this is direct evidence, rather than relying on a second measurement, excites Stephen Boughn, a cosmologist at Haverford College in the US. "We currently only have two pieces of direct evidence for dark energy. Any additional evidence that indicates its existence is very important," he says. "We want a patchwork of evidence, from many different places, just to make sure the whole picture hangs together. This work helps with that."

Posted by Particle Decelerator at 12:45