Sail to The Moon 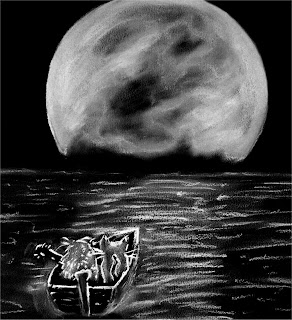 In one of the more poetic and outlandish stories this week, The Observer report that engineers are planning to build the first extraterrestrial boat.

They want to launch the craft towards Titan - Saturn's largest moon - and parachute it on to the Ligeia Mare, a sea of methane and ethane on its surface.

Robin McKie, Science Editor of The Observer writes, "the robot ship would sail around this extraterrestrial sea for several months, exploring its coastline and measuring the winds and waves that sweep its surface."

Professor John Zarnecki, of the Open University is one of the scientists working on the project. "Waves on Titan's seas will be far larger, but much slower, than on earthly oceans, according to our calculations. That suggests Titan is the best spot in the solar system for surfing."

The mission to Titan - the only moon in the solar system with a thick atmosphere, of nitrogen and methane - would be the first exploration of a sea beyond Earth and could provide evidence about the possible existence of complex organic chemicals, the precursors of life.

It is part of the proposed Titan Mare Explorer, or TiME project.

If TiME is selected from a shortlist of three possible missions being considered for funding by NASA, McKie explains that "the TiME probe will be fired at Titan on a billion-mile journey across the solar system. Once it enters the moon's thick atmosphere the craft would parachute down towards the surface and then drop into the 300-mile-wide Ligeia Mare. It would then spend several months afloat on an oily sea taking measurements of waves, chemicals and other variables."

It follows on from the research undertaken by Cassini-Huygens. In 2005, the space-probe, Cassini deployed Huygens on the surface of Titan. Many of the instruments for that craft were built by Zarnecki and his Open University team, and that experience will put them in good stead for the TiME mission, should it go ahead.

Posted by Particle Decelerator at 13:08