Forces from the future stop the LHC? 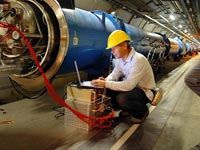 More wild speculation regarding the LHC this week, as Harvard physicist, Kevin Black, is speculating that the failure of the Large Hadron Collider soon after it was switched on in September was caused by intervention from the future to stop the experiment happening.
He writes:
"I came across a bizarre paper recently suggesting that the LHC might be shut down. Not because of the funding cuts that have been threatening particle physics projects around the world, nor because of law suits accusing the LHC of threatening life on Earth.
No, the paper suggested that future effects caused by the production of particles, such as the Higgs, could ripple backwards in time and prevent the LHC from ever operating. If it hadn't been written by two very well respected and accomplished theoretical physicists, I would have stopped reading at the title alone: Test of Effect from Future in Large Hadron Collider; A Proposal."